Plug-in Hybrids: An Electric Step in the Right Direction

If you’re anything like us, you may also feel the end of the world is just around one very hot corner.  Seeing America’s infrastructure snapunder rising temperatures is terrifying.

Tailpipe emissions account for one-fifth of worldwide carbon emissions.    Ideally, we would combat this by pouring funding into public transit, and single passenger car trips would become a rarity.

Instead, we’re clinging to life as usual.  How do we have our automobile cake, and eat it too? 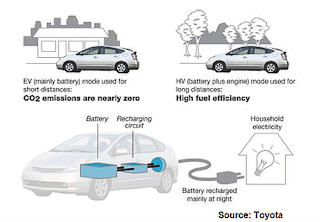 Consumer habits have shown that most Americans fear the fully electric vehicle.  Unfortunately, the climate can’t wait for us to adjust to the idea of going to a charging station rather than a gas station.

Luckily for future generations, drivers are willing to compromise.  Sales of plug-in hybrid vehicles are up 381%in just the first half of this year.  We won’t completely give up petroleum, but we are dieting.

This new breed of hybrid can travel 20 miles before switching to gasoline.  And, the cost to charge at night is equal to a mere 75 cents per gallon of gasoline.

Plug-in hybrids are a great alternative to traditional EVs.  They ease consumers into the ways of electric vehicles, while allowing drivers their gas tank security blanket.

Call Solar Forward to learn about powering your plug-in hybrid or electric vehicle with the sun.