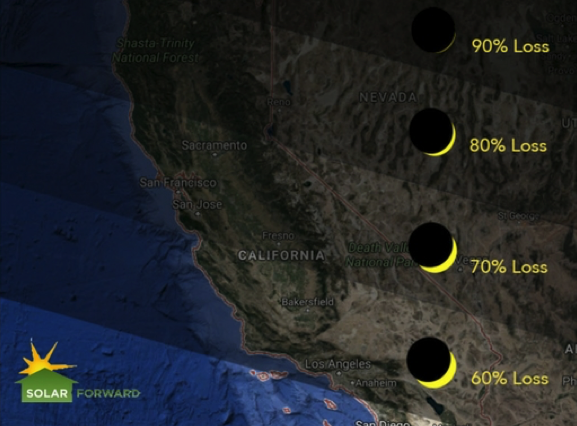 The solar eclipse is expected to reduce solar radiation by around 62% in Southern California.

On August 21st, our nation will experience a rare coast-to-coast total eclipse. For the first time in 99 years the moon will pass directly between the Sun and Earth, causing the moon’s shadow to traverse the earth. Known as the Great American Eclipse, this event will sweep the nation from the Pacific to the Atlantic.

For the residents of Los Angeles, this phenomenon will occur in the morning. At around 9:05 am, we will see the moon begin to edge into the disk of the sun. At 10:21 am, we will experience our maximum eclipse. The eclipse will end by 11:45 am. The occasion promises to be fascinating and memorable, but it begs the question: how will it affect our solar power output in California?

Follow these steps on the right to become a Solar Eclipse savior!

For more information and to ‘Take the pledge’, visit https://ia.cpuc.ca.gov/caleclipse/index.html

Eclipse maps can be found at: https://eclipse2017.nasa.gov/eclipse-maps